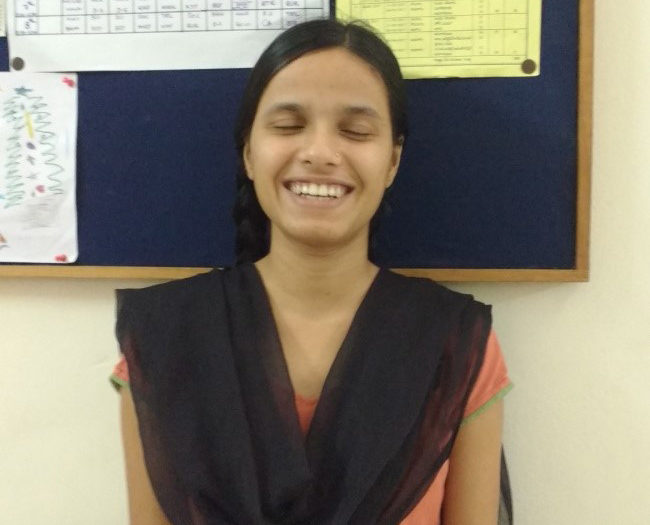 Reshmi* who hails from the beautiful county of Nepal located in Central Asia between India and China was born blind along with two of her siblings, never to see the icy caps of Mount Everest or the lush landscape of her small village. Reshmi’s* parents were dismayed at the plight of their children, with such a disability, they were concerned about the children’s future and only saw a dark light ahead.To add to the misfortune of the siblings, the family was also struggling to survive day by day with little to no income. Being a daily wage laborer with meagre earnings, Reshmi’s* father faced a lot of difficulty in supporting his family. Their condition was such that sometimes the family had to survive on one meal per day.

Their dim fate was turned for the better when one day Reshmi’s* family was introduced to Mrs. Helen eager who suggested that the children be taken to the school for blind in Andhra Pradesh. After a lot of convincing, the father reluctantly agreed to send one of this 3 children to study at the school in Bobbili.  Just at a young age of 7 years old, it wasn’t easy for Reshmi* to leave behind her entire family and make the journey to India. With a nervous heart and a painful parting with her parents, Reshmi* journeyed to the new country with courage and hope for a better life at the blind school.

On her arrival to India, Reshmi* initially struggled to settle into her new environment. She found it hard to communicate with others because she could neither speak English nor Telugu, the only language she could speak was Nepali. Over a period of time her friends and teachers helped her learn the local language and now she speaks Telugu as good as the locals. Reshmi* is dedicated to her studies, she is now well-versed at braille and has completed her high school and is currently in junior college.The School for Blind has given her an opportunity to get an education which in her circumstances in Nepal would not have been a possibility. She now has an opportunity to influence change in the lives of her family and eventually be able to go back to her country and contribute to positively shaping the lives of other people who are visually impaired in Nepal.